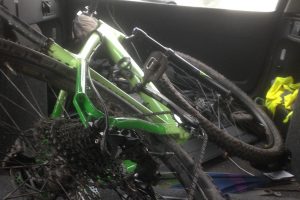 I’ve blogged about a DNF before, but how about a DNS? It happens, and feels pretty crappy. So I’m just going to go through what happened, as I’m sure it may feel familiar to some of you, and may even help with accepting it.

Last year I entered an off road duathlon, which was cancelled, I was given a free place in this years event which I was really looking forward to, however in the week leading up to the race, I was feeling pretty negative about the whole thing. The thought of getting up on Saturday morning in the cold and dark to drive to Afan wasn’t really appealing to me.

On Thursday I woke up with a sore neck, and couldn’t swim on Friday because it hurt too much, I was also pre-menstrual. My moods have been really bad for the last 3 months. This is almost another blog, but just as an overview, I think some of my hormones are out of whack, as I have been extremely tearful and depressed the week before my period, which isn’t normal for me, then as soon as it starts I feel normal again.

Anyway I got up, prepared to race, and kept telling myself that as soon as I got there and was registered etc, it would all be fine, and that I would feel worse if I didn’t race, so off I drove. Just over an hour later I arrived at registration where it was still pretty quiet. I payed my £5 to park, went into registration, and my name wasn’t on the start list. The organiser said he’d have to wait to give me a number, and to come back in around half an hour. I left the building starting to get tearful, as I wanted to rack up and just get everything sorted so I could warm up etc. I waited for over half an hour then went back to join the now long queue. When I got to the table they still couldn’t give me a number, and there was no sign of the organiser. I was brushed off, and my second emotional episode of the day started. I called Patrick and explained the situation, I assumed I would have to wait until everyone had registered before I got my number, which isn’t how I like to get ready for a race, leaving everything until last minute. I tried to let it go, and just think of racing for fun, but was just too upset, and part of me just wanted to go and meet the boys. Patrick told me to go for a quick ride around, and then I may feel better, as sitting in the car on your own is not great for morale! I rode off into the bike park, did a few circuits, and then started to feel a bit better, but not better enough to go and make a nuisance of myself again at registration. By now I knew that they would be closing transition, and I just wanted to get out of there.

Maybe if I’d been feeling a bit more positive I would have gone and found the organiser, but by that time I was on a pretty negative spiral, felling sorry for myself, and generally giving myself a hard time. I decided to forget it, and go meet the boys at the climbing wall, so rode around a bit more until the runners had gone, and then drove down to Pontadarwe, where I went for a run, and continued my Canal path tour of Britain (3 different paths in the last 3 months!)

The next 24 hours were horrible. After we’d finished climbing I cried a lot, tried to explain myself to Patrick, and got into a pretty depressed state. I’m over it now, helped by the fact that my period started, I’m sure.

If you are struggling with motivation, keep an eye on it, as it may be a sign of something a bit deeper. I’m monitoring my moods now, as The past 3 months have been pretty up and down, it could be a sign that something else isn’t right. Look out for patterns of behaviour, and if there’s anything you can do to improve the way you react in certain situations, then that can be positive. But also remember that sometimes you just aren’t “on it”