Turning into a film maker

I have been busy at the computer again this week, after an epic ride with 4 of the Pembrokeshire Velos  to receive my plaque for winning the 100 mile time trial. I met them at Kilgetty at 6:30am and rode 71 miles up to Resolven. I managed to hold on to their wheels for most of the way, but during the last hour I kept getting dropped! Considering I hadn’t been out for longer than an hour and a half since Ironman on the bike, I was pretty pleased. They had cycled from Pembroke Dock and ridden 83 miles in total. I was a bit annoyed that my garmin wouldn’t download to Strava afterwards as I’m sure I would have had a few QOM’s!! 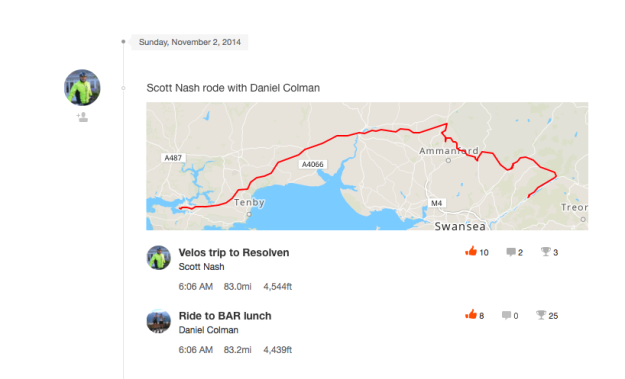 The full trip, I was there too honest!

I have been putting together some videos for my coached athletes, which has taken up quite a bit of my time, I am aiming to show exercises that can be done easily at home without equipment. Hopefully they will find them useful!

Planning for next season

I’m starting to get itchy feet and have started to plan for next season. However I’m still very busy allowing myself to get unfit! But have managed to get my plan for next year down on paper. Colour coded of course! I have entered The Titan, middle distance triathlon, and I am planning on entering The Wales Triathlon. I have also entered The Wiggle Dragon ride media fondo,  which is the weekend before The Titan, maybe not great planning, but got a little bit carried away with the wiggle fever on Facebook. At least its all local stuff, so not too much travelling involved. 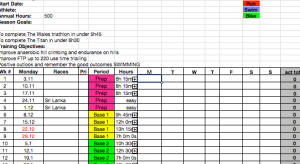 A bit of social riding

I thought it was time I went out with the dynamos again, but had to be home by 10.20, as Devon had rugby. I left at 8.30am so I could get a bit of an extra ride in before meeting at the Bloomfield at 9am. Unfortunately I forgot to start my garmin when I started out with the club, had a good chat with Kim before I had to head back home, and thought I would give a good blast up Coxhill to try and beat my time up there on Strava, how frustrating when I got home and realised that I had forgotten to start my garmin! 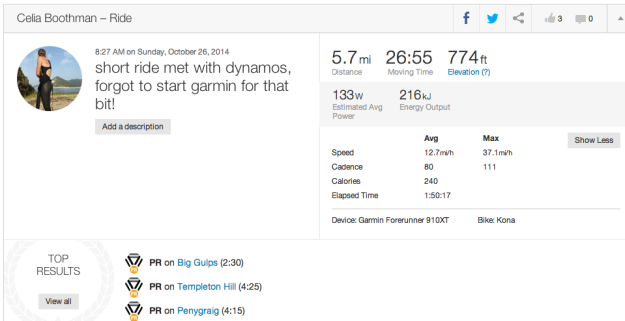 A long week and feeling it

Getting to the taper

There comes a point in your training when there is nothing more you can do to increase your fitness and you need to accept that you have done all that you can. Whatever happens on the day will happen, I got back off a long ride feeling pretty negative as my power and speed were low, but thinking about it rationally I had done a 10km (running) Time Trial the night before, and had been building for a while, only having a short recovery after the 100 mile TT, so not surprising really! There is a great post about tapering here which I found helpful and inspiring.

I have been looking at last years taper for Wimbleball and comparing it to my training this year, I had some feedback that my taper may have been a bit drastic, this was because I was ill after a race and then started tapering after I had recovered. This years will not be so drastic and I’ll be nice and ready to race!

I went along to the 10km Time trial organised by Pembrokeshire Triathlon club on Tuesday evening, hoping to better my time from 6 years ago!! I can’t believe how long ago that was. My time in 2008 was 43.23. When I arrived Ian, the timekeeper, decided that I would be fastest and put me last. I was not so sure, but went along with it anyway! Ellie (the only other woman) went off 1 minute ahead of me and I tried to keep her in sight. It soon became apparent that she was flying, as I counted the time from her passing a lamppost, she was already more than a minute ahead within the first few miles. , it was a lovely evening, and nice to have a chat. I got a time of 41.14, so 2 minutes faster than last time. I should be happy with that, but maybe have been feeling a bit negative this week.

I decided to ride the whole Ironman course the day after, and was pretty dissapointed in my speed. I may have been tired, and also lacking motivation doing the route on my own. I’m not sure that I really wanted to do it, because I knew that if I was slow it would make me depressed, but Patrick suggested it and I thought the pro’s would outweigh the con’s. Anyway I borrowed his go pro which was quite fun, although I have now spent hours editing the ******* thing.

A bit of geekiness

After I had recovered from the ride, digested my stats, done some more research, and generally got slightly obsessive about numbers, I spotted that my Intensity factor for the ride was based on my old FTP, so with a few calculations I realised that I will be able to go faster on race day, (of course some other factors will come into play too) but if the maths is right then I’m happy !! I wrote my race plan for Half Outlaw this week, and felt pretty excited about it. I haven’t done the run training that I would like to, but I’m hoping my bike fitness will carry me through. I have had a few good paced runs recently so I reckon I will still be able to get my planned time goal. It’s getting to that time when I start doing displacement anxiety tasks, like writing more and more lists, and colour coding them :-p I bought the book The Chimp Paradox, written by Dr Steve Peters, who I had read about in Victoria Pendleton’s autobiography. It came up on my amazon recommendations (dangerous, those are!) since it arrived I haven’t had a look in, as Patrick has hijacked it, and keeps quoting me parts of it (maybe I won’t need to read it!) Apparently its OK to make lists, phew 😉

I’m aiming to get out for a sea swim once a week now the weather has warmed up. I have so far been from Saundersfoot towards Wisemans bridge and back, and Amroth, where I had a lot of help from the tide on the way back…lovely, although I did have a dream about jellyfish the night before. Saundersfoot in the morning

I had a great race at the “Beast Bach”. I was 2nd female overall, and also got a trophy for being first local female. Race report here. The next day I went out to practise for the 4 up time trial in 3 weeks time, we rode for a couple of hours, each taking turns at the front, my legs can really feel it now, ouch…time to recover before next Sunday I think! New Year and all that…

As its the New Year I have been thinking about the past year and what I’ve achieved, putting it into words affirms the successes of 2013 and gives me something to build on for next year.

Firstly I upped my hours. Hours and distance completed in 2013

I came 5th in The Slateman, and was then ill for a week after! I completed my first 70.3 on Exmoor in poor conditions, came 6th in my age group, 21st woman overall, and in the top 16% overall (men and women)

I won’t talk about Bala again! But if you want to read what happened its here

So for 2014, I have only entered 2 races, Half Outlaw, and Ironman Wales. I will probably do a bit more Time Trialling, and strangely would like to do a 50 mile one again, (my memory of the last one must be failing me!) Also I have entered The Tour of Pembrokeshire, and I’ll probably do part of the long course weekend, so I’m looking forward to a good year ahead.

New Year is traditionally a time to make resolutions. Personally I don’t like making resolutions in the New Year. I can make a resolution any time that I want to, and I think a lot of people set themselves up to fail with unrealistic, and unsustainable goals, which are often negative e.g. “I’m going to give up chocolate, alcohol, smoking etc”. Then when they fail they give themselves a hard time for failing, instead of creating a positive sustainable goal, for example, “I am leading a healthier lifestyle”. Its not something that will happen overnight, and every day is a step towards the goal, but gradually we can make changes in order to become that goal.

Sometimes I look at where I am now and realise it is because of these small changes that add up to the big picture. Its a great feeling. Last hill climb, the end of the summer, more baking…

After feeling pretty negative last week I have started to adjust to the change in season, and my loss of fitness. I have had my level 2 coursework to complete, and also Milo’s birthday to sort out, so I’ve been busy with that. Also I have been running, cycling and swimming WITHOUT my garmin!!!

Its been good not to have any pressure and I still need more time to recoup before next year. I made some progress planning next years training, and have also looked at areas that I can improve upon. Having the last race of the season as a DNF has focussed me a bit more on what I need to work on. I now have a list of strengths and weaknesses, and action points! Got back into some baking, and chutney making, and have experimented making idli, (if you don’t know what they are the link is here) which I am now addicted to, I think they would be great snacks to take on long rides, so I am perfecting making them!

I spent all of Wednesday contemplating whether to do the last velos hill climb. At 4pm I was about to go out on a ride on my own, when I changed my mind and decided to go after all. I cycled there and back, it was a lovely way to close the season, getting back in the dark, and seeing the sun set behind Carew castle. I took a wobbly photo with my phone….you get the idea! Carew on the way back from hill climb

I didn’t get my best time, but enjoyed myself, although I couldn’t stop coughing afterwards. I took my garmin, but had no power or Heart rate data, so was all good!