Last year I rode the 50 mile national Time Trial Championship in Abergavenny, and at the end I swore I would never, ever do it again. About 6 months later, and after signing up for Ironman Wales I decided that it would be a good idea to do another long Time Trial as part of my training in the lead up to Ironman. Unfortunately (or fortunately depending on how you look at it) the only long TT that I could do was the 100. I entered online, thinking I don’t actually have to do it.

My mum agreed to support me, and we drove up the night before, after checking the weather we decided not to camp. I booked the Premier Inn in Pontypool. My mum was still optimistic about the weather, thinking that it would rain overnight and then be clear for the morning. I was not so optimistic after checking my phone. At least it didn’t look windy!

At 5:30am the alarm went off, and I had a cup of tea, dressed and applied liberal amounts of Sudocrem and Hoo Ha glide to my posterior, (thanks girls for the tips!) Unfortuatley I forgot that I then had to sit in the car. The sudocrem had already seeped through, so I sat on my coat to protect my mums upholstery, ( must remember next time to apply cream at last minute!)

As we drove somberly towards the start in the torrential rain I had mixed feelings, I was really looking forward to doing the TT as I have never ridden 100miles before, but the weather was horrendous, and I could tell my mum was a bit worried, as she asked whether I would be riding along the dual carriageway, and if there would be cars on it. I was also worried that they would cancel, because as we got nearer to HQ there was not the usual hubbub of riders warming up and riding to the start.

We arrived at 6:30, (the first rider was off at 7:09am) I joined the huddle of freaks, sheltering outside HQ who had decided that come rain or shine they were riding 100 miles today. The organiser had not arrived yet so there was some speculation as to whether it was cancelled.  Suddenly the doors were opened and signing on sheets signed. I committed my signature to paper and organised myself, giving my 2 bottles to my mum and explaining where and when to wait. I went out to the car and slung my bag over my shoulder and felt a sharp pain across my back. Now my mind really started playing up, and as I rode to the start my power meter started dropping out, and I could hear a clicking on my front derailler. I was starting to wonder if the gods were trying to tell me something, but I moved my garmin to my handlebars, and realised that the clicking was only the cable knocking against the crank arm, and my back was fine in the TT position.

I set off behind Tanis Hand (ex Tenby Aces, and the only other woman to ride) The route is 3 laps of the dual carriageway up to Monmouth and back to Abergavenny. At the first turnaround I saw Tanis and she looked a way ahead of me so I just stuck to my plan. When I got out on the second lap I did a quick bit of maths and realised that I was going to be at the lay-by that I told my mum to wait at about 15 minutes before I told her to get there. Happily I spotted her car as I approached ( she likes to be early thankfully) and I stopped to fill up my aero bottle and grab the other bottle from her. I said I was feeling good and got on my way. The photographer was at the next lay-by as globules of snot, spit, and rain dribbled down my chin. I couldn’t really muster a smile!

Next I saw Jill Coleman who cheered me on, I was averaging 20.8mph so was feeling amazing as I was aiming for 19-20mph. I sang a lovely rendition of Chesney Hawkes I am the one and only (where did that come from?!!) as I was overtaken by one of many men, and I had one of several manic laughing fits as I realised that, yes, I really was doing this, and doing a good time. I had done 50 miles in 2h20 which was faster than I did the 50 mile TT in last year. The rest of the second and third lap was a blur of feeling sorry for lonely, and sodden supporters holding out drinks bottles, marshals waving frantically and pointing, and looking forward to the tunnel near Monmouth for a couple of minutes shelter.

On the second and third lap I started to pass a few people, including Tanis, and Jill told me that I was on the team now, as Paul had to pull out. About 20 miles from the end I started to watch my power dropping, and had to talk to myself a few times to keep focussed, the last few miles seemed the longest ever. I shouted my number out to the clapping timekeepers and with comedic timing the rain stopped and the sun started to come out.

When I got back to HQ my mum told me that there was only 1 other woman who completed the race, so I jokingly said “I may be Welsh Champion then”, to which she replied “you are!” This seemed pretty funny to me and I got inside where Jill, Paul, Dan and Rob told me that we’d won the team prize too. 3 cups of tea later I had warmed up and was presented with my Championship cap, and we had a team photo.

A word from the organiser

If you are not interested in data look away now 😉

My aim was to keep above 150 watts, and below 180, I had set some alerts on the garmin, but couldn’t really hear them. I also had an auto lap set for 25 miles, but again didn’t hear the first lap. My power did go down at the end, but in comparison to last years 50 mile TT it was not so extreme, so I was happy with my pacing. I could probably have held back more in the beginning, as my average power for each lap shows.

Below is a comparison between last years 50 and this years 100, you can see how I started way too hard in the 50, and suffered about halfway through! This year I had also prepared myself psychologically and knew what to expect.

So overall, I was amazed with my result, I rode about 15-30 minutes quicker than I thought I would, so with some great performances under my belt I feel ready for Ironman Wales! 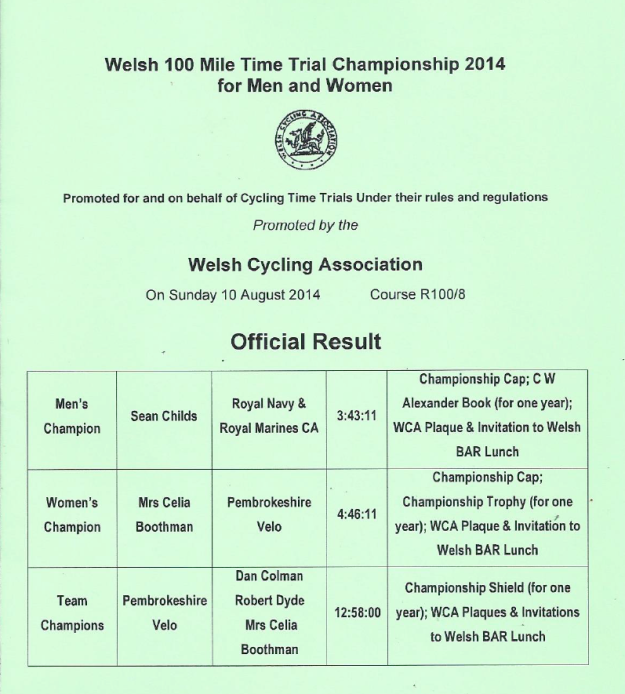 Spain, the good, the bad and the ugly

Why women don’t participate in sports

Getting back into the groove!

Message Us on WhatsApp